Elements of Me is a website where you can expect to read and see a lot of different topics I find interesting and entertaining to me. It's a website dedicated to all things good! Food, music, places to explore....

You can know more about why Elements of Me started on the About Me page.

Ok, so first of all, I’ve been meaning to write here about this for a while but haven’t had the time, but since I love Queen and this concert was on my bucket list for so so so so many years, it was only right that I had to have a post about it on my little corner of the internet. So here we go!

When Rock in Rio’s organizing team announced QUEEN were gonna come and perform in Lisbon, I had to buy a ticket. I had money saved for these guys and AC/DC for so long you have no idea…..I was excited at max! When the day finally came, I did my best to be at the front rows and was being annoying to my friends at the point of saying “no way….after Mika I’m not moving from here. I’m gonna cry if I don’t see them from the first rows! For real! It’s a dream people!” ahahahha (Yeah, I know, it’s too much excitement for a band, but it’s an amazing band that doesn’t go out of style, and that still inspires people all over the world. So…..bear with me ahah).

We all can agree that Adam Lambert is no Freddie Mercury, and there is not a person on earth that can fill in for him. However, if there is someone that can for sure bring the songs back to life, and give QUEEN the chance to be on tour and play live again, that someone is Adam Lambert. He has such a powerful voice that can shut anyone up, and yes he is a full on “diva”, but that’s what makes him unique and honestly he was/is a “diva” at the right moments which makes me like him and the show!

I love Adam’s voice, I’ve been following his music since he was auditioning for American Idol and I have two of his albums, and when I read the news some years ago that he was going to sing with QUEEN, I got happy and was like “Yes! They’ll be back on stage!”. So having him as lead singer wasn’t a problem for me. Plus, at the beginning of the concert he said “There’s only one Freddie Mercury”, what he did was give the band the opportunity to play the songs again and perform live at the most faithful level possible. If it wasn’t him, we would have no concerts people! Common, Freddie is a legend but most unfortunetly we cannot bring him back (I wish I had a time machine to go back to their Wembley Concert), what we can do is live his songs, and Adam gave us the opportunity to see QUEEN live again!

The whole concert was amazing. Between the songs, the chats, the surprises, it was all fantastic. Jokes, selfies, “uma fotografia!”- said Brian May while holding on to a selfie stick ahaha, it was a complete show I can say. I knew what I was going for, and I didn’t get disappointed at all.

I confess I was mostly going for Brian May and I was in ecstasy for the old man ahahah no notes missing, he’s still got it people!

“Love of My Life” was performed by Brian May, which for me was a surprise because I didn’t know he could sing like that, and the same goes for Rodger. The drum battle between father and son was quite awesome, but the guitar solo from Brian May was epic. All the light work, lasers, the sound of the guitar…hum….so good.

“Don’t Stop Me Now” made people jump like hell, and “Bohemian Rhapsody” made us (me ahah) cry. During the beginning of that song they left the recording of Freddie’s voice because it is epic and no person can do it better, and then came Adam with all his power to end the song, and he did it well in my opinion.

The band can most definetly still “Play the Game”, and the crowd can always expect for some “Thunderbolt and Lightning”, and from where I was standing it was an awesome show. Long live QUEEN! (pun intended ahah) 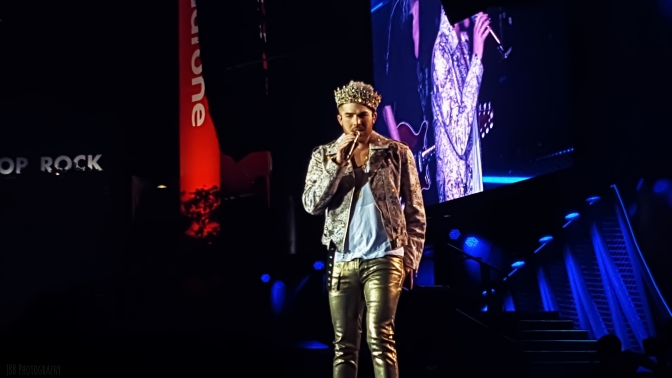 You can check out the set list down here, and even listen to most of their songs on Spotify here (for the lazys like me who don’t want to search….it’s just clicking!):

Don’t forget to follow this blog, and now you can keep track of every post on Bloglovin’ too by clicking the following link —> (Follow Elements of Me on Bloglovin’) 🙂

Thank you, and I hope you’ve enjoyed the post!

My name is Joana, I'm 24 years young and I'm from a beautiful, cozy village called Cascais, in Lisbon, Portugal. This website/blog is supposed to be my little corner on the internet, where I can feel at home, unwind, ramble about all the little things I love, episodes of my life, and elements of my life that make me....well me! Enjoy :) View all posts by Joana Burding Barruncho